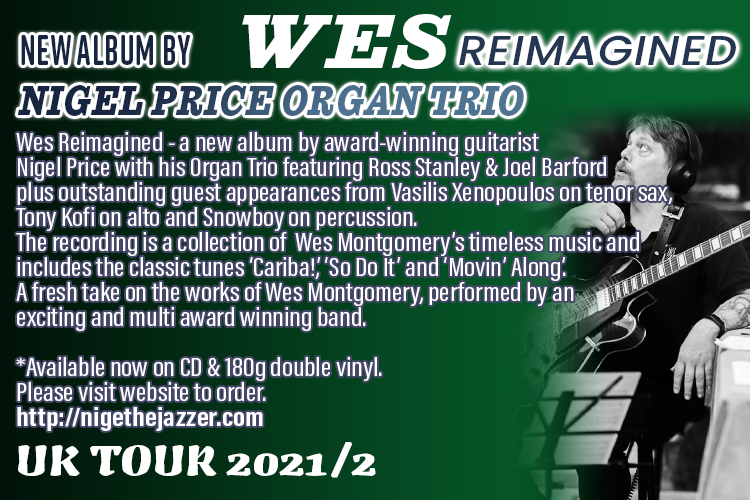 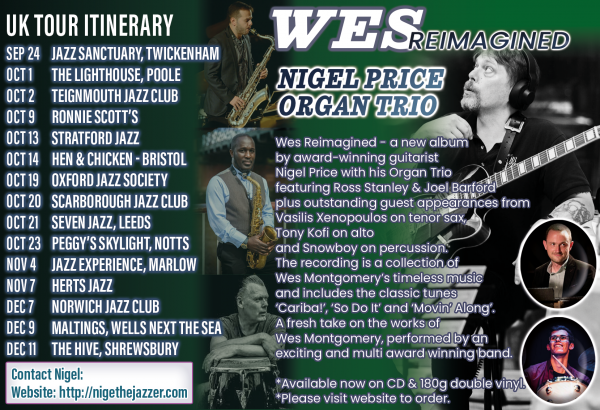 IMPORTANT REVISION!
THE MALTINGS GIG ON DECEMBER 9TH HAS BEEN CHANGED TO DEC 8TH.
NIGEL IS IN NORFOLK ON DEC 8TH - SO IT MADE SENSE TO PLAY ANOTHER GIG IN NORFOLK THE FOLLOWING EVENING, RATHER THAN TWO NIGHTS LATER.

Wes Reimagined is award-winning guitarist Nigel Price’s new album with his organ trio - Ross Stanley and Joel Barford - and features outstanding guest appearances from Vasilis Xenopoulos on tenor saxophone, Tony Kofi on alto and Snowboy on percussion. The recording is a collection of Wes Montgomery’s timeless music and includes the classic tunes ‘Cariba!’, ‘So Do It’ and ‘Movin’ Along’.

“I haven’t tried to reinvent the wheel in any way – it’s just a kind of “what if? The great man’s tunes are played in the same spirit but with a little look at what might have been. So, ‘Leila’ moves from a cool ‘west coast’ vibe to an out and out burner, ‘Far Wes’ to a waltz and ‘Road Song’ from a bossa to a grooving shuffle,” says Price. “I also think that Wes had an honest, direct and melodic style which influenced a lot of the funk, soul, boogaloo and earthy groove music that was to come shortly after his passing. I have no doubt that he would have been at the forefront of that movement. Therefore, I’ve intertwined some of these later styles with Wes’ music.”

Price wanted to acknowledge the later period of Montgomery’s recordings and commissioned the trombonist/arranger Callum Au to write three string quartet arrangements for the Phonograph Effect Strings and transform some pieces into larger productions.

“What started out as a little daydream has become an exciting body of work of which I am very proud,” concludes Price. “I must say it turned out even better than I imagined.”

Nigel Price started his professional career in his early 20s touring Europe with various reggae and funk bands before settling on a solo guitar career and turning his attention to jazz. Citing early influences as Wes Montgomery, Joe Pass, John McLaughlin and the Mahavishnu Orchestra, Price honed his craft by attending gigs and sitting in with the players of the time. He has played on more than 50 albums including seven as a leader, spent 10 years with acid jazz outfit The Filthy Six, was a member of James Taylor’s band, JTQ, for three years (with whom he recorded five albums) and performed with the legendary David Axelrod. Price’s career highlights include a support show for Gladys Knight at The Royal Albert Hall and an appearance on Van Morrison’s recent album, Keep Me Singing. Price has worked tirelessly to organise his own tours (including a 56-date tour in 2016 and an extensive tour in 2020, despite the pandemic). He is a regular performer at London’s Ronnie Scott’s Jazz Club where he has made more than 500 appearances. Price’s awards include the 2010 Parliamentary Jazz Award for Best Jazz Ensemble and the 2016 British Jazz Award for Best Guitarist. He was also nominated for Best Guitarist at the 2014 British Jazz Awards. Price has teamed up with Fibonnaci Guitars to produce The Londoner archtop guitar.