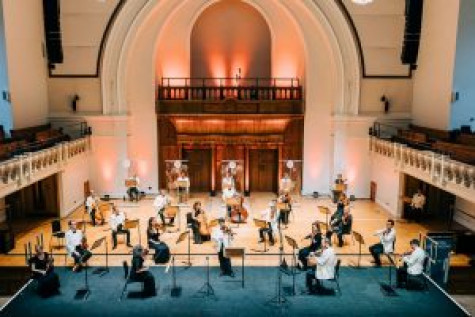 Over the last thirty-five years this 16 piece big band has grown to become the most popular of its kind in Britain. In its ranks are players who between them have worked with Frank Sinatra, Ella Fitzgerald, Ted Heath, Henry Mancini and Shirley Bassey to name but a few. Formerly the Len Phillips Big Band, in 2021, with backing from Arts Council England, the band rebranded and updated to become the LP Swing Orchestra.

Through the Covid-19 pandemic, the band’s livestreamed concerts were world-leading in both their quantity and quality. With over 100,000 views for concerts, broadcasting from locations as varied as a field in Surrey to London’s Abbey Road Studios, the programme was a triumph unlike anything seen from any other orchestra in the World.

The band is heard regularly on BBC Radio and Jazz FM and can be seen live at concert halls and theatres around the country. In recent years this amazing orchestra has performed in London at the Canary Wharf Festival plus regular appearances at the Ritz Hotel. In 2017, they travelled to Moscow to play for the enormous Russian Debutante Ball.