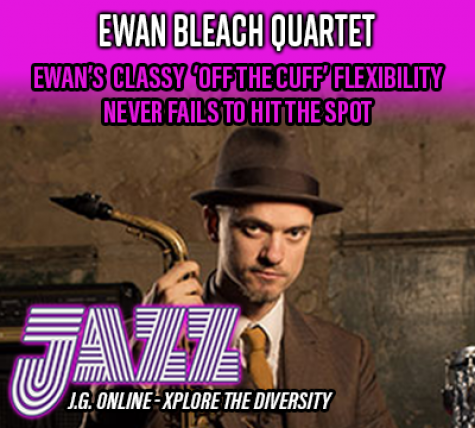 Ewan Bleach is a clarinetist, saxophonist, pianist, singer, bandleader, composer, teacher and session musician based in London and specialising in the early styles of jazz, ragtime, blues and swing. He is also involved in projects of new music with various ensembles, and has been involved with other genres including afrobeat and traditional Turkish music.

Ewan led the Cable Street Rag Band in London and is also involved with international projects including Frog and Henry and the New Orleans band Tuba Skinny, which he has spent time with in the states

He is particularly interested in playing for dancing and has run many nights focusing on live music for dancing in London in collaboration with the swing dance scene, most notably the Cakewalk Cafe at Jago (formally passing clouds) in Dalston and Juju's Jazz Band Ball in Shoreditch.

Ewan's interest lines primarily in old sensibilities of pre-war music that he calls "music for dancing and romancing" and is fond of playing for functional events such as weddings and other private parties and happy to be setting the mood as much as being in the limelight.

His first studio album  "Ewan the Night'n the Music"  is relased on 11th March  with  a launch concert on the 22nd April at St Giles in the Fields. It's ballads album, a tribute to the poetic side of jazz improvisation and the rich melodic compositions of the old songwriters and features John Kelly and Martin Wheatley on guitar, Colin Good on piano and Jim Ydstie on bass and of course myself on, clarinet, and soprano, alto and tenor saxophones.

Buy it from Friday the 11th of March off his brand new label: Old Style Records. here's the link: https://oldstylerecords.bandcamp.com/releases