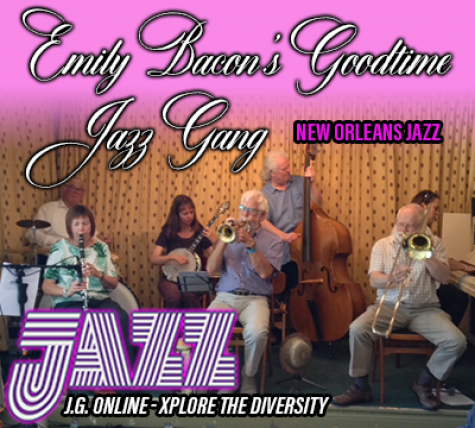 Liz Bacon  achieves a personal touch in her creative clarinet playing, with a sound that is fresh and exciting. She avoids playing two notes when one will do. She has a style where the melody is always present but not restrictive, with sufficient freedom rather than repetition. Liz is a musician whose preferred band work is in the ensemble tradition of New Orleans Jazz. While not setting out to copy directly, she is inspired particularly by the late George Lewis and Sammy Rimington, at the same time absorbing the full spectrum of the New Orleans clarinet players. Liz has been playing for over 45 years and is much in demand guesting with many bands and plays in her daughters band "Emily Bacons Good Time Gang"
Paul Bacon has the same basic musical philosophy as his wife Liz; his style is rooted in the New Orleans tradition. He has particularly mentioned being influenced by the playing of Baby Dodds, Paul Barbarin and Alex Bigard  as heard on the 1944 American Music recordings of Kid Shots' New Orleans Band. Paul has been playing for over 56 years, his experience and authentic approach makes him a much sought after musician. He therefore works regularly, not only with "The Mississippi Dreamboats" that he leads with his wife Liz, but also a number of other bands including "Emily Bacons Good Time Gang". Paul was born in Bedford and started playing clarinet at 15 but after 12 years moved on to double bass and then drums. His style has always been the uncompromising beat of the revival bands of New Orleans. Paul plays all over the UK and Europe and has visited New Orleans.
Emily Iris Bacon started singing regularly with bands from the age of 14, being inspired by Ella Fitzgerald, Billie Holiday and many others. In 1995 aged 9 Emily sang at the Keswick Jazz Festival and again in 2013 and 2014/15/16/17 She was recorded at Kirkcudbright Jazz Festival in 1999 with The River Band and the CD was a great success. Emily's latest recordings are now available. Her Parents Paul and Liz have encouraged Emily in her musical development since her school days. She was also taught to play piano and clarinet. However her trained but natural singing voice is her favoured and most accomplished instrument. Emily has now started to play piano in her own band "Emily Bacons Good Time Gang" in the New Orleans style taking after her Mum and Dad.
Spike Kennedy has been playing bass for over 40 years, including double bass for the last 8 years. He is respected for his solid rhythm work and fluid playing style that enables him to be comfortable playing in a number of genres including jazz, blues, country, folk and rock'nroll. Spike has played with numerous jazz outfits in South Wales during the 1980s and 90s including "The Saratoga" and Philharmonic Bands with Jeff and Simon Palser who provided backing for visiting stars such as Clyde Bernhardt and Beryl Bryden.
He toured Germany with "The Riverside Band" before joining the "Mike Harries Band" who were notably joined on stage at Brecon Jazz Festival by legendary Slim Gaillard. Over many years, Spike has been in demand as a session player and has played in many notable blues and R&B bands such as Snatch it Back, The Red Hot Pokers and Junior Hacksaw. Spike has also appeared on television and recorded with Welsh folk band Calennig. He is also a respected bass drummer, specialising in New Orleans "Second Line" drumming with The Adamant Brass Band, The New Era Reborn Band and The Camellia Brass Band.
Sarah Thatcher's first experience of playing jazz professionally was in her teens, when she played ragtime piano in a local pub with her elder brother. She used her earnings to buy a banjo and soon became a fixture in the South Wales Jazz scene with the Acme Jazz Band and the Memphis Seven. After a short break travelling overseas, in the early 90s, Sarah met multi-instrumentalist band-leader Norman Thatcher with whom she played in numerous line-ups and projects over many years. This included tours of Scandinavia, New Orleans and Britain with frequent appearances at all the leading U.K. traditional Jazz festivals. Her melodic, uncluttered style and solid time keeping ensure that the other musicians have a sturdy anchor to optimise their natural virtuosity. This means that Sarah is frequently in demand as a rhythm player. As a result, she continues to play and record with leading figures in the British traditional jazz scene. 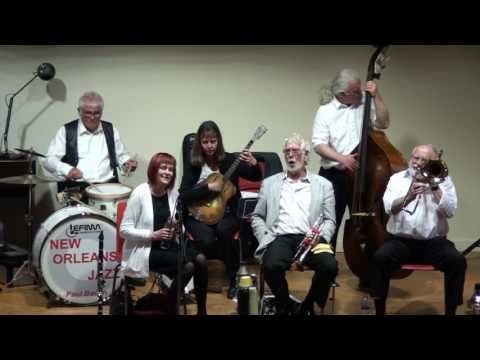