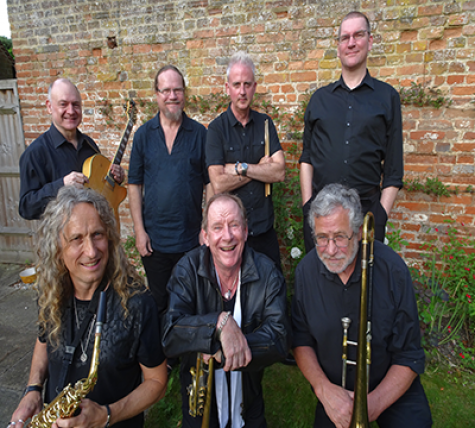 Digby (now celebrating forty years in the professional jazz business) continues to lead his 'Half Dozen'. During their 20th Anniversary tour in 2015 (they formed in 1995) they played nine jazz festivals (including Bude and Brecon); more than thirty theatres and a record-breaking number of jazz clubs! The Half Dozen have won the 'Top Small Group' category the British Jazz Awards many times.

Of their first album (Twelve Feet off the Ground) in 1998, Dave Gelly (in 'The Observer') said: "There cannot be another band with quite this range - from Dixieland via hard-bop to R'n'B - and as if this weren't enough they turn into a close-harmony vocal group at unexpected moments. Amazingly accomplished!" From 2003 to June 2007 the Half Dozen turned into one of British jazz's most talked-about acts while they toured and recorded with blues-legend GEORGE MELLY.Their first CD collaboration with George, 'Singing and Swinging the Blues!' on the Robinwood label, was voted the Observer's 'Record of the Week' in August 2003. George's 2006 release on the Candid Label, 'The Ultimate Melly' saw Digby and the Half Dozen join forces with co-stars including Van Morrison, Jacqui Dankworth, and the Swingle Singers for what George would subsequently call: 'my favourite album of all'. In March 2007 they recorded what would be his last album of all; 'Farewell Blues' for Paul Adams' Lake Records.

Since Melly's death in July 2007 Digby and his Half Dozen teamed with blues/pop legend Paul Jones. Despite such collaborations however the Half Dozen - over twenty years - has devised and perfected a solo act which is all its own. "It's quite hard to establish a new jazz band in the 21st century" says Digby " - especially without a catalogue of hit recordings from the old days of the Trad Boom. We came along too late for that! But I think people are at last getting used to the idea that the UK needs a new band now that so many of the older giants have left the scene".

So the Half Dozen now appears at jazz festivals clubs and concerts presenting their very own show. The group's aim is simple; to play great music, and entertain their audience! "That was good enough for Louis Armstrong" says Digby " - and it's good enough for us too!"

In 2015 the Half Dozen celebrated its twentieth year with a major national tour and two new albums. "I suppose we see ourselves as 'keepers of the flame' for all the classic jazz traditions celebrated by our distinguished forefathers" says Digby " - and after twenty years of preparation and performance I have a superb band of stars ready to carry the banner forward!".